The family, whose name is "Curta" (pronounced "kuʁta") in German and Italian and "Curtaz" in the Savoyard patois (pronounced "kyʁta", the "z" is not spoken and shows the stress on the penultimate syllable) , is documented as early as 1445 in Gressoney (in Walserditsch: Greschonei [greɛɪnɛɪ]), a Walser town on the south side of Monte Rosa. First we find the notary Johann Jacob Curtaz (1436-1510), who lived in Orsio, a hamlet in the "upper part", in what is now the independent community of Gressoney-La-Trinité. The Curtaz house from 1588/1789 still exists here.

The family's origins are said to lead via the Curta / Curtaz in Aigle and Yvorne (Waadtland / Pays de Vaud) into the Valais. There is "Willermus de Arvilar" dictus "Curta" in Bramois (today a district of Sion) in 1278 the first Curta mentioned. He was apparently married to Bruna, presumably a daughter of Girold I. de Turre, "maior domus" of Sitten and Vitztum (Vidomne) of Ollon, and was related by marriage to Rodulphus de Saxo (from the Manegoldi family) through this same Bruna. It is assumed that the Curta / Curto from Sion / Wallis (from which the Courten are also derived) go back to the notary and merchant family Curti, who have lived in the Lombarian town of Gravedona on Lake Como and then also in Cantù since the 11th century . Family relationships in Lombardy around Como, Cantù and Gravedona and personal attributions such as "Lumbardi", which we can still find in the three following generations, testify to this.

Over time, the family expanded into the "middle part" ("Mittelteil)" and "lower part" ("Unterteil") of Gressoney, which today form the independent municipality of Gressoney-Saint-Jean. Here Johann Jacobs great-grandson Angelin de Curta (in Walserditsch: "Hanschelin") is a notary and bailiff in the second half of the 16th century. In 1580 he also built the "old Curta House" in Castel, which still exists today. We soon find several branches of the family in Saint-Jean: starting with Angelin, the Curtaz Branche Capaluogo/Predelais and the Curta Branche Castel, then in the 18th century the Curta Branche Chemonal ("z'Moalersch") from Orsio. From Orsio, another branch established itself in the neighboring upper Ayastal (Canton des Allemands) with descendants in Extrepiraz (patois: Ehtrepira), Brusson (patois: Breutson / Brétson, Walserditsch: Britse), in Verrès and Ivrea.

The Curta mostly worked in the commercial profession, many were notaries or occasionally court clerks, judges or bailiffs. But there were also over a dozen pastors in the family - and almost as many painters, especially from the “Chemonal” branch (“z’Moalersch”). Johann Joseph Anton Curta (1782-1829), for example, painted the Way of the Cross in front of the parish church of Saint Jean. Franz Curta (1827-1861) painted the Last Judgment, a fresco in the chapel of Lignod (Ayastal). The merchant, painter, photo pioneer and philanthropist Valentin Curta (1861-1929) was also well known for the first travel guide for Gressoney and his chronicle "Gressoney then and now".

Today only families of the Curtaz branch Capaluogo & Predelais with descendants in Turin, Indonesia and England live in Gressoney. There are also descendants of the secondary branch in the Ayas Valley in Brusson, Verrès and Ivrea. The remaining branches are extinct in Gressoney. However, the Curta branches in Castel and in Chemonal have found a continuation through emigration to the Upper Rhine in Germany.

On the Upper Rhine

Since agriculture was no longer sufficient for food in the so-called "Little Ice Age" from the 15th to the 19th century, many Gressoneyers earned their money as merchants in Switzerland and on the Upper Rhine. It is not for nothing that Gressoney is recorded in contemporary maps as "Krämertal". As part of the Duchy of Savoy, it was also part of the Upper Rhine region of the Roman-German Empire. But mainly through their Alemannic mother tongue, the Gressoneyer found easy access to the people in the Bernese country, on Lake Zurich or Lake Constance, as well as in the Black Forest and on the Baden or Alsatian side of the Rhine Valley.

Among the Gressoney merchants, the Curta have the earliest and closest ties to the Upper Rhine region alongside the lychee. A Hans Curta was a member of the "Zum Falkenberg" merchants' guild in Freiburg im Breisgau even before 1501. Between 1556 and 1658, at least 89 entries in the stall money books of the Freiburg annual fairs refer to Curta from Gressoney. Some also set up trading establishments here. Peter Curta (approx. 1660 to 1737), son of the court clerk Johann (Angelin) Curta from the "Castel / Upper Rhine" branch, had been a member of the Freiburg merchants' guild "Zum Falkenberg" since 1684 and opened a cloth shop here in 1698. His sister Johanna was the wife of the Gressoney merchant and major entrepreneur Johannes Litschgi in neighboring Krozingen, where he became known as the "Fugger" of the Breisgau.

Peter's grandson, Johann Joseph Curtaz (1736-1796), also left home (at the age of nine) to learn the trade of cloth merchant from his uncle Johannes Michael Curta in Freiburg. As a merchant, he then settled north of Freiburg in Oberweier near the up-and-coming commercial and industrial town of Lahr on the western edge of the central Black Forest around 1764. There he was married twice and had a total of twelve children. Descendants of Johann Joseph Curtaz can still be found in three families in Oberweier and the neighboring town of Friesenheim as well as in Offenburg, Ladenburg and near Hamburg.

The eldest son of Johann Joseph Curtaz from Oberweier, Johann Valentin (1780-1840), was also traditionally sent to the commercial apprenticeship. There were close connections to the merchant Johann Franz Valentin Curta (1746-1805), who was descended from the z'Moalersch in Chemonal (Gressoney) and who probably knew Johann Joseph Curtaz through his training in Switzerland and southern Baden, then met in 1788 in Hüfingen on the eastern edge of In the southern Black Forest and opened an office. He was probably not only the name but also the godfather of Johann Valentin and after his father's early death in 1796 he was probably also the guardian of the then 16-year-old. Because in his presence as a witness, Johann Valentin married in 1803 not far from Oberweier in Kappel am Rhein, and settled there as a merchant. The spelling of the family's name changed in Kappel in contrast to the Oberweier relatives via Curta and Kurta to Korta. Today eight families from this branch still live in and around Kappel and three more in Speyer and near Karlsruhe.

The beginning of the 19th century was a more uncertain time for merchants. Not only did business become more difficult, the Napoleonic Wars also brought incalculable dangers and tragic fates with them. Such was suffered by Johann Franz Valentin Curta and his family when he was murdered in 1805 by an Austrian soldier in his shop in Hüfingen. With the help of her family, his widow Rosina managed to raise the eleven children and get them on the right track: Among them we find a merchant and postman, a wax manufacturer and innkeeper and an artist. The youngest son, Franz Joseph Curta (1801-1861), spoke 15 languages and became a private teacher for the Fürstenberg Princely Family in Donaueschingen, who after his and his wife's untimely death looked after the youngest children with family warmth and married them well: Marie Eva with Charles de Malliard de Châtonnaye near Friborg (Switzerland) and Amélie with Arthur de Mauraige from Maubeuge in the Franco-Belgian border region. For Amélie's children were Prince Karl Egon III. and his older sister Elisabeth still godparents. Descendants of this branch of "z’Moalersch" on the Upper Rhine could be found in Mannheim and Berlin until the Second World War. 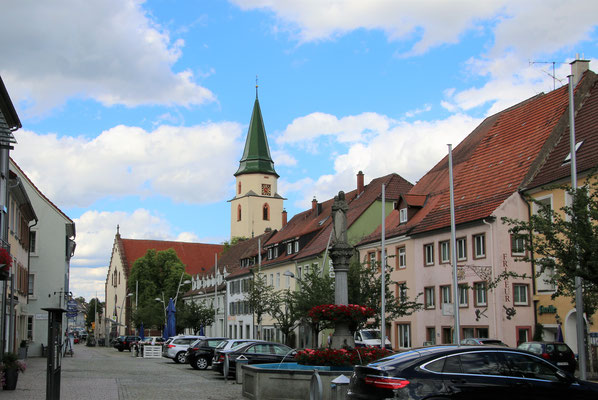 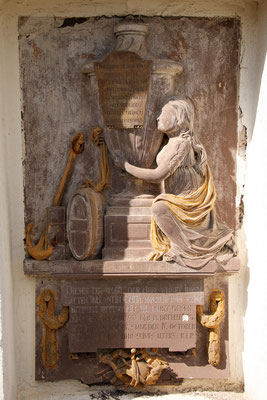 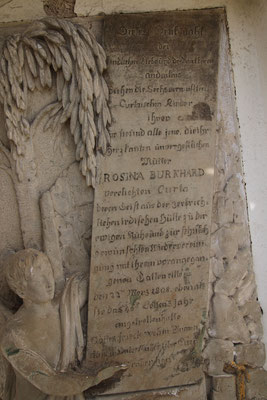 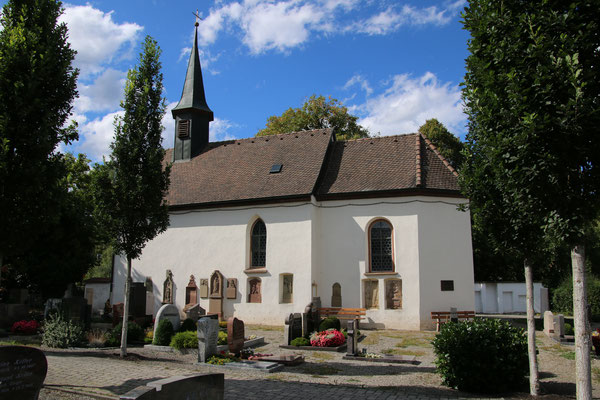 Coat of arms and seals 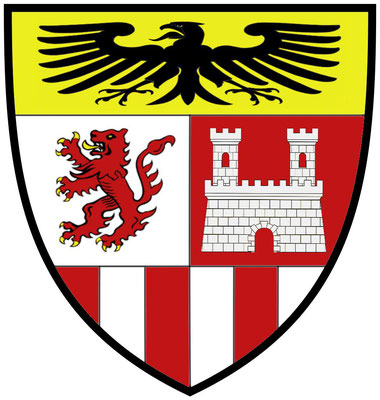 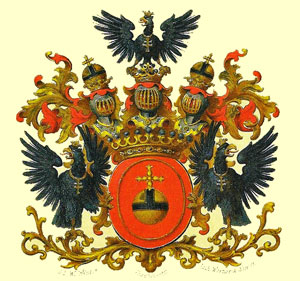 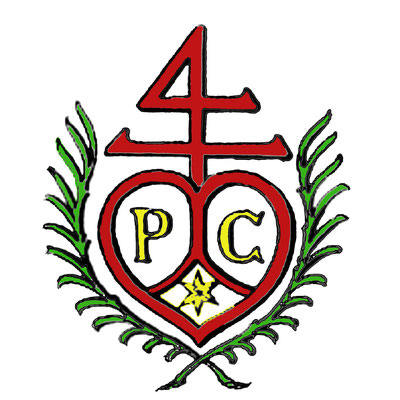 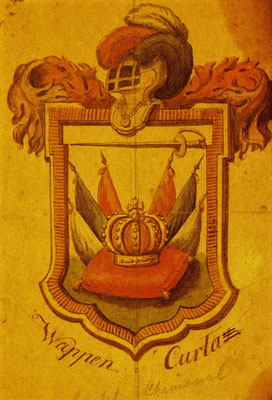 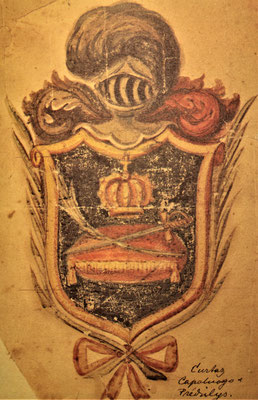